This is seventh post looking at the distribution of communities, namely the Khanzada and Meo, that were gazetted as agriculturalist in census of 1901 in the Punjab province. In this post, I will also look at the distribution of both communities in Rajputana and the United Provinces as well. Both groups were entirely Muslim. The Meo and Khanzada were concentrated in the Mewat region, in what is now south east Haryana and north east Rajasthan and claimed a Rajput status. Both groups claimed a similar origin from the Jadaun clan of Rajputs. The Meo and Khanzada were also found in Alwar and Bharatpur states in what was then the Rajputana Agency. In UP, the Meo were found largely in two regions, Rohilkhand, and the Doab region of western UP. Most of the Meo in UP were called themselves Mewati. The total Meo population in 1901 was 374,923, of which 147,198 (39%) were found in Punjab, 168,596 (45%) were found Rajputana (modern Rajasthan) and the remainder 59,129 (16%) were found in UP. I would also ask the leader to look at my post on the Khanzadas to get some background information on the tribe. 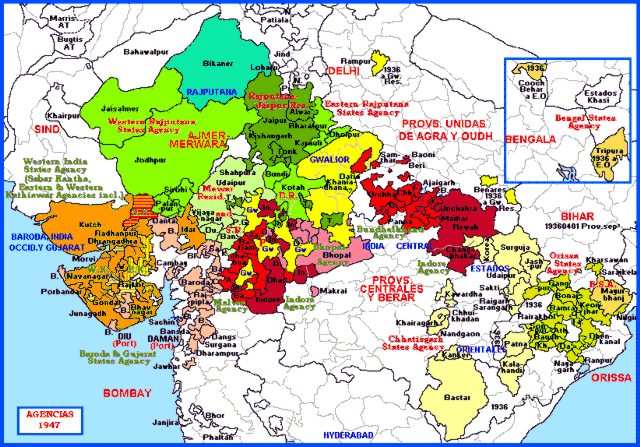 Most of the Meo population was concentrated as I have said in the introduction in the Mewat region, roughly the eastern portion of Gurgaon, and southern bits of Delhi. Outside these areas in Hissar and Karnal, there were a few isolated villages of the Meo.

The Meo of Dera Ghazi Khan

Meo Population of the United Provinces

Almost all the Khanzada were found in Gurgaon, where in 1901, they owned nine villages near town of Nuh and to the north of Firozpur.

In this post, I shall look at four tribes, namely the Arwal, Babbar, Manjotha and Meo, which are found in Dera Ghazi Khan and Rajanpur districts, located in the south and west of Punjab, bordering Baluchistan. This region is dominated by the Baloch tribes such as the Leghari and Mazari, and the status of the Jat is very marginal. Often a Jat tribe is affiliated with a Baloch tribe, and are often referred to as Jat of the Mazari, or Jat of the Leghari. In fact, the word Jat has now being replaced with the word Jamote, which was originally a word used as self-description by the rulers of Las Bela, who belonged to the Samma tribe. This word is now been appropriated by the Jats of Balochistan and Dera Ghazi Khan region. Just a point about the Meo tribe. Most of the Meo are associated with Mewat region, which covers parts of Haryana and Rajasthan in India. However, the Meo of Dera Ghazi Khan are distinct from the Meo of Mewat, as they left the Mewat region some four centuries ago, and settled among the Leghari Baloch, with him they are closely associated. They now refer to themselves as Jamote, and intermarry with tribes of similar status. All these tribes speak the Seraiki language.

Bellow is a list of Jat tribes enumerated from 1911 Census of India for Dera Ghazi Khan District:

As the list show, the Bhatti, Sial, Khokhar and Bhutta are larger of the Jat clans of the Dera Ghazi Khan and Rajanpur. Incidentally, these clans predominate through out southern Punjab. The four clans I am looking at, two, namely the Arwal and Manjotha have traditions of migration from the Makran. They claim to be Jadgal by origin. The question then arises who exactly are these Jadgal. The terms Jadgal and al Zadjali is used interchangeably by early Arab historians of Makran region of southern Balochistan. Their settlement in the Makran region is referred to in Arab histories to the first centuries of the Muslim era (circa 7th century). They are described as sons of kings who were holding the country between Kirman and *Mansura in Sindh,but whether they originated from the west or the east is not stated. The word Jadgal was also used interchangeably with the word Jat. It seems that Makran may have been the originally homeland of the Jat.

The Arwal are closely connected with the Manjotha, and may even be considered as clan of that clan. In 1911 Census, they were not separately enumerated. According to their tribal traditions, when the Mirani Baloch arrived in the Dera Ghazi Khan, the Arwal left Makran and settled in the region. The Arwal follow Baloch customs in all matters connected with marriage, etc., thus differing from nearly all the other Jat tribes of that region. This has including raring camels, and Arwal were semi-nomadic. They speak Balochi, although most also speak Seraiki as well.

The next tribe I intend to look at are the Babbars. In numbers, they were the fourth largest tribe in the region. There tradition makes their ancestor as Raja Karan, who appears in the Mahabharat. In Bahawalpur, where they give the following genealogy : —

All these four are well known tribes found in Rahim Yar Khan and Bahawalpur. The Babbar are Suryavanshi Rajputs, and said to be converted to Islam at the hands of Makhdum Jahanian of Uch Sharif. Their ancestors are said to have left the region near Delhi and settled along the banks of the Indus. In Rajanpur District, the Babbar are found in Tatar Wala and Chah Sherwala villages.

Like the Arwal, who some consider to be a clan of the Manjotha, they claim to have come originally from Makran in Baluchistan. A small number of Manjotha also claim an Arab origin.They are Jadgal, and those of Dera Ghazi Khan still speak Balochi. However, according to another tradition, the Manjotha are by origin Barlas Mughals. Manjotha are not unique in having said to have come from Makran, and it does seem some five centuries ago, a large number of Jadgal are said to have migrated into southern Punjab.

The Manjotha are found in the districts of Layyah, Dera Ghazi Khan, Muzaffargarh, Rajanpur, and Multan.

The last community I intend to look at in this post are the Meo. Like the previous communities discussed, the Meo consider themselves as Jamote, but have a distinct and fascinating history. For the Meo are a well known ethnic group found in the Mewat region that lies south of Delhi, and covers the Bharatpur and Alwar regions of Rajasthan. The Dera Ghazi Khan Meo are said to have settled in the region during the reign of the Mughal Emperor Akbar, in the 16th century. This community is now Saraiki speaking, having been settled in the region for five Centuries, and has no connection with Meo of Mewat. Their main settlements are Wah Mayo and Mayo, as well as five smaller villages, near the town of Jampur. A second cluster of Meo villages are found in Rajanpur District, in particular Qasba Mayo. Unlike the Mewaty Meo, the Dera Ghazi Khan claim an Arab origin, having to said to have migrated from Iraq. This claim is contrary to what the Mewat Meo claim, which is a Rajput origin. Having settled in a region where Rajput ancestry is of little consequence, the Meo have now begun claiming Arab descent.