In this post, I shall look at four tribes, who are generally of Jat status in Jhelum and Mirpur districts, but who are considered Rajput in Rawalpindi. They are all aals, or clans of larger tribal groupings. The Gujjral are Bhattis, the Matyal are Thakkars, Nathyal are Janjuas and Thathaal are Suryavanshi. Unlike the Bar tribes in my last post, they have no recent tradition of pastoralism. In fact, these Chibhalis are in essence mountain farmers, but in Jhelum, both the Chibhalis and Bar groups have intermarried, producing a distinct Jhelumi Jat culture. This is especially true in the Pind Dadan Khan plains, where the Chibhali groups like the Nathyal and Thathaal are found in close proximity to Gondal, Tarar and Ranjha who were once all Bar nomads. 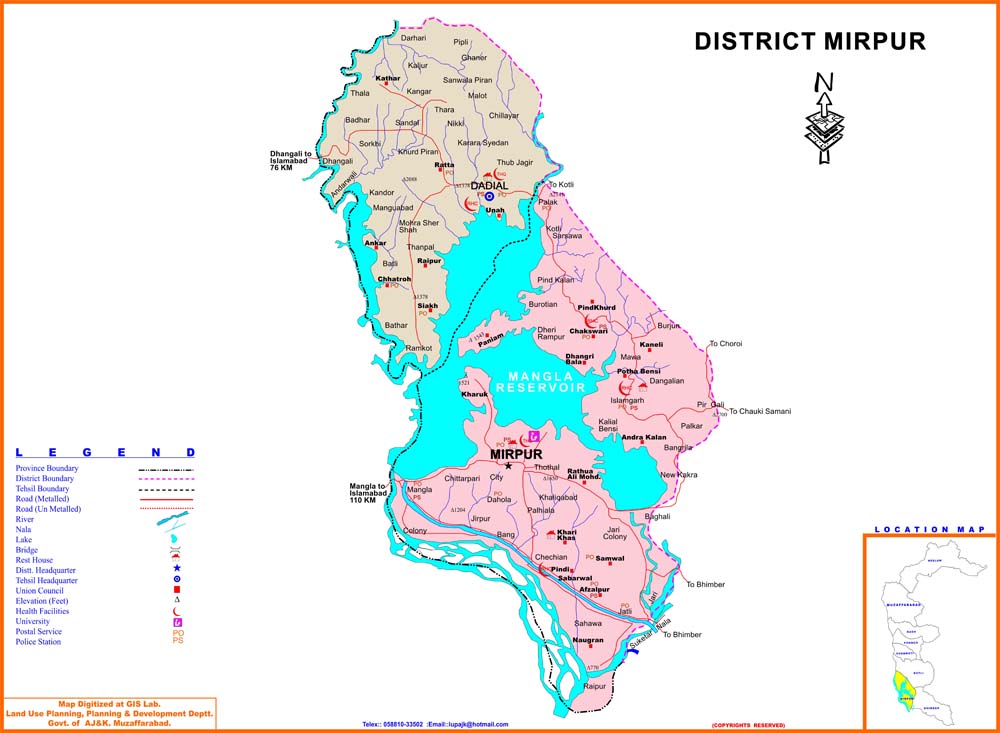 I shall start off by looking at the Gujjral, a clan of Jat status found in Jhelum and Gujrat districts. Just to clarify, these Gujjral Jats, as far as I know have no connection with a Khatri clan, also called Gujjral, which incidentally was historically also found in the same region. In my earlier postings, I made reference to the fact that the various tribes in Pothohar and the Jhelum valey have name often ends in al, which is patronymic, for example, the sons of Kals, are the Kalyal and so on, very similar to the Arabic Bin or Slavic ovich or ov. So the Gujjral are the descendents of Gujjar, which itself opens a number of questions. For the Gujjar is a well known tribe found through out Punjab, with a large presence in the Jhelum valley, who do not and are not considered as Jat. So how did these sons of Gujjar evolve in the a Jat tribe. The answer lies in the traditions of the tribe, which states their ancestor was a Bhatti Rajput, who was suckled by a Gujar foster mother, and given the name Gujar. Despite this close relationship with the Gujjars, the Gujjral intermarry with clans such as the Gondal and Lilla, who are of Jat status, and not with groups that fall within the Gujjar category. Outside Chakwal, they are found in the village of Dhok Gujral near the town of Dina in Jhelum District, Mohra Heeran near Choa Khalsa in Rawalpindi District and the village of Pind Jattan in Bhimber District (Azad Kashmir) is an important tribal settlement.

I next look at the Matyal, sometimes pronounced as Mathyal, a tribe largely found in Jhelum and Rawalpindi districts. Like other tribes of the Pothohar region, the Matyal have a good many traditions as to their origin, often these being quite contradictory. According to one of there traditions, the Matyal get their name from the Hindu goddess mata, the Matyal being the devotees of Mata. The goddess mata is popular incarnation of Devi and one of the main forms of the Goddess Shakti, a deity closely associated with kshatriya groups in North India. These devotees of mata were members of Thakhar caste, a group of quasi-Rajputs found in the Jammu hills. This would mean that like the Kanyal, and Nagyal, the Matyal are immigrants from the country known as the Chibhal. However, another tradition makes the Matyal a clan of the Tanolis, a tribe of Barlas Mughal origin found in the hills of the Hazara division of Khyber Pakhtunkhwa. The Tanolis have two divisions, the Hindwal and Pallal, of which the Pallal are further divided in twelve clans, these being Bhujal, Rains, Ansal, Tekral, Baigal, Judhal, Sadhal, Dairal, Bainkaryal, Matyal and Lanhya. According to this tradition, the Matyals left their Hazara home in the thirteenth century, and settled in Malot There is still a hamlet or dhoke near the town of Malot called Dhoke Matyal or hamlet of the Matyal. Most of the Jat Matyal add suffix Chaudhry to their names, but some Matyal in the Pothohar region ( Sohawa and Gujar Khan) prefer to add Raja to their names.

In terms of distribution, the Matyal are found mainly in Chakwal, Jhelum and Rawalpindi districts of Punjab, as well as the adjoining Mirpur and Bhimber Districts of Azad Kashmir. They are also found in the capital of Pakistan, Islamabad. According to the census of India 1911, they numbered 1,147 in Jhelum District.

In the Islamabad Capital Territory, the center of Matyals is the village of Gagri situated on the Soan River.

The next tribe I will look at are the Nathyals, sometimes spelt Nathial. There ancestor was a Natha Khan, a Janjua Rajput, who is said to have taken a Jat wife. His was therefore made to leave the tribe, and descendants thus became Jats. These origin stories are common among many of the Jats of the Jhelum region, and may suggest some connection with the Janjuas. So who exactly are the Janjua. According to their tribal traditions, groups of Rathore Rajputs, emigrating from Jodhpur, occupied the uplands of the Salt Range, around a thousand years ago. The leader of this movement according to the common account, was Raja Mal. He appears in every family tree.

Many prominent Muslim tribes trace their lineage back to the Janjua through the five princes of the House of Raja Mal Khan Janjua. Indeed the Nathial are not the only Jat tribe of Janjua descent, so do the Ghuman, Ganjial, Bhakral, Banth, and Basoya Jats. The five princes were Raja Bhir Khan, Raja Jodh Khan, Raja Kala Khan, Raja Tanoli Khan and Raja Khakha Khan. Jodh and Bhir were born of a Gakhar Rani while Kala, Khakha and Tanoli were born of another Rajput Rani.

Natha Khan came from the line of Raja Bhir. The lineage of Raja Bhir is described by Lepel H. Griffin, in his famous book Chiefs and Families of note in the Punjab (Lahore, 1910, ii, p254) as follows:

On the death of their father they determined to divide the country called, from Raja Mal, the Maloki Dhan between them. Jodh took the Salt Range near about the Makrach, and captured the town of Makshala from a colony of Brahmans (mohyals)…He changed its name to Makhiala and built there a fort and two tanks for rain water….. Wir Khan (also spelt Bhir), took the possession of Khura (also spelt Khewra) near modern Pind Dadan Khan. He had one son, Raja Ahmad Khan, from whom have descended the families of Malot, Badshapur, and Dalwal

Raja Bhir’s son, Raja Acharpal became a famous chief after his father’s death. The above mentioned Ahmed Khan was in fact Acharpal, who later changed his name after converting to Islam. Over time sections of the Janjua took to agriculture, and according to tribal traditions became Jats.

The tribe is mainly located in Bhimber and Mirpur districts of Azad Kashmir, and Attock, Rawalpindi, Jhelum and Chakwal districts of Pothohar. They are also found in the Jammu. The Nathyal in Jammu are predominantly Hindu, while in Pakistan are predominantly Muslim. After partition of the sub-continent in 1947, many of the Muslim Nathyals from the Jammu region migrated to Pakistan and settled mainly in Gujrat and Faisalabad districts. And the Hindu Nathyals from Bhimber and Mirpur regions migrated to India, and many of these are settled in Jammu, and some of them are also found in Delhi.

There is a village by the name of Dhoke Nathyal, which is located in Attock district. It is known as Nathyal Sharif, because of the presence of one of the Naqshbandi khankahs. Nathial in Pind Dadan Khan Tehsil of Jhelum District is another important Nathial settlement.

We now look at the Thathaal, sometimes spelt and pronounced referred to as Thothal and even Thathiyal. They are a clan of a Rajput and Jat status found in the area between Salt Range, Gujrat, Rawalpindi, Sialkot, Narowal , and in Azad Kashmir. There also a community of Sikh Thathaals found in Hoshiarpur and Himachal Pradesh. Prior to partition, there were several Muslim Thathaal villages in Gurdaspur District, all of whom moved to Pakistan.

According to their clan traditions they are said to be the descendants of a king named Raja Karan. The Rajah comes in tribal history of several Chibhal tribes such as the Narma, but whose identity is unclear. It could refer to Karan, the figure from the Mahabharat. The tribe claims to belong to the Suryavanshi branch of Rajput, claiming descent from Raja Karan through his son Raja Thathu whose other son Naru is said to have founded the Narma clan. However, as we have already said, the Narma are Agnikul and not Suryavanshi. But the two tribes live in close proximity, so it is possible one group adopted the other traditions. According to some tribal traditions, Raja Thathu was the first member of the tribe to convert to Islam. Due to the many dialects of the Punjabi language, the pronunciation of Thathal differs according to locality. In Potowar/Pahari it is pronounced Thothal. In Gujrat district it is written Thathal or Thathiyal. Other variations of the name in Pakistan and India include Thathar, Tharar and Thorar.

Some of the Kharian Tehsil Thathaals have a family tree that show that the name of their ancestor as Thuthir. This sound more like an Indian name than “Thutho” or “Thotho”, and is possibly a version of Sudhir. There is a strong possibility that “Thotho” or “Thutho” could be a shortened version of the original name. The next question is who was this Rajah Karan. Some Thathaals make reference to Karan being the ruler of Kashmir. It could be that the reference could be to Karan of the Mahabharata, who gave away his kavacha ( chest shield) and kundala (ear rings) to Lord ndra, who was disguised as a beggar. This generosity is to have cost Karan very dearly and he was killed by his brother Arjuna in the battle of Kurukshetra. Or could it be that there was indeed a Karan that lived much latter. Thathaal tradition refers to Karan being a contemporary of the Mughal Emperor Jalaluddin Muhammad Akbar ( lived between 1542–1605), and it was not Karan but his son Thatho who was first convert to Islam. This would tally with the fact that there are still Thathaals who follow the Hindu or Sikh faith in eastern Punjab.