In this post, I look at the distribution of the Kathia and Kharal tribes according to the 1901 Census. Like the Khokhars, these two tribes were separately enumerated from the general Rajput category. Both claim Panwar Rajput ancestry. I would ask the reader to look at my post on the Kathia. Time permitting, I wish to write a post on the Kharals.

Kathia Population of the Punjab

In this post, I shall look at four tribes, namely the Arar, Kathia, Mahaar and Wahiniwal, that are found largely in the Neeli Bar region, roughly the lands between the Ravi and Sultej rivers, which now form part of the modern districts of Sahiwal, Khanewal, Okara, Pakpattan and Vehari. Bellow is quote from the Montgomery District (roughly Sahiwal, Vehari and most of Okara) gazetteer that gives quite a good description of the pastoral tribes at the end of the 19th Century.

“The population is distinctly divided into marked sections – the purely agriculture inhabitants and the pastoral tribes. The former consist of the castes, both Musalmaan and Hindu, which are generally met throughout Eastern Punjab, viz Arain, Kamboh, Hindu Jat, e.t.c. But the latter are almost entirely confined to the region which extends from the southern extremity of Multan District to within thirty miles of Lahore. They are all Musalmaans, and their favourite occupation is breeding and grazing cattle. They are locally known by the name of Jat, in contradistinction to more settled inhabitants, who call themselves ryots or subjects. The most important tribes are the Kharals, Fattianas, Murdanas, Kathias, Wahiniwals, Baghelas, Wattus ad Johiyas. The two latter are chiefly confined to the Sutlej, but the others only possess land on the Ravi, and graze their herds in the Doabs adjoining that river”.

Just a note about the tribes referred to in the above quote, the Fattianas are branch of the Sial tribe, while the Murdana are a clan of the Baloch. 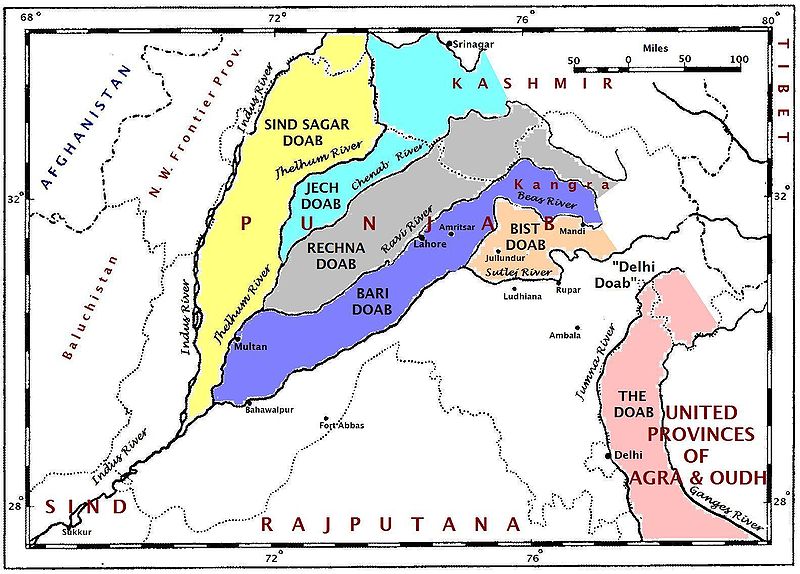 Map of the Doabs of Punjab: Source Wikipedia

In my other posts I have looked at the Baghela, Dhudhi, Hans, Khichi, Langrial, Naul, Nonari, Rath and Sahu, where I have dwelled deeper into the culture and traditions of several Bar tribes, many with homelands in the Neeli Bar. But none were as localized, as the tribes I intend to look at in this post.

I shall start off with the Arar, who are a tribe of Jat status. According to their traditions, they claim descent from a Arar, Mughal nobleman. Their ancestor came from Delhi into the Punjab in the 15th century. By contracting marriages withJats, they to have now become Jats. There initially settled in Dipalpur, and from there spread to a wide area of Punjab. As pastoralists, they roamed widely in the Neeli Bar until the arrival of the British in the 19th Century, when they were forcefully settled.

They are now found as far west as Mianwali District, and as far north as Sargodha District. However, the greatest concentration remain Okara, Sahiwal and Bahawalnagar districts. Most of there villages are along the upper course of the Khanwah canal in Okara District.

The Kathia, like the other two tribes already referred to in this post were pastoral tribal grouping.

The Kathias claim to be Panwar Rajputs descended from a Rajput prince named Kathia who lived about the time of their conversion to Islam, in the reign of the Mughal Emperor Akbar. An attempt has been made to identify the tribe with the Kathoei, who in their stronghold at Sangla Hill, who are said to have resisted the victorious army of Alexandar the Great, but there is nothing definite to show a connection between the Kathoei and the present Kathia.

According to their traditions, the Kathia are descended from the legendary Rajah Karan of the Mahabharat. Originally they resided in Bikaner, whence they migrated and founded the state of Kathiawar, which takes its name from the Kathia tribe, and is in modern day Gujarat State of India. The region of Kathiawar is named after the Kathi tribe, who claim to be Suryavanshi and not Panwar Rajputs. Although it is possible, that groups of Kathi tribesmen migrated to Punjab in the middle ages, as the Kathi were also a pastoral tribe.

Coming back to the Kathia, there legends to talk about Sirsa as their first place of settlement in Punjab. From Sirsa, a further migration took them to Bahawalpur. In this migration, they were accompanied by a few families of the Baghela tribe. Next they crossed over to Kabula stream and went on to Daira Dinpanah. From this place they spread over to Kamalia.

During the reign of the Emperor Akbar, the Kathia were required to give their daughters in marriage to Emperor Akbar. The Kathia refused, and a Mughal army was sent against them. The Kathia were defeated, and the Raja was made a prisoner. He was then conducted with great honour to the Court of Delhi, where the Emperor Akbar treated him with great kindness. This behaviour led to the Rajah deciding to embrace Islam. In 1857, the Kathia together with the Wahiniwal, played a key role in the insurgency against the British. Murad Ka Kathiya, who along with Mokha Waniwal, was involved in the killing of the British Assistant Collector and army Captain Lord Berkeley near Koray Shah at eastern bank of River Ravi, during 1857 War of Independence.

The Kathias are found in the Ravi river valley of the Multan and Sahiwal districts, also in the south of the Jhang District, They are also settled in the district of Toba Tek Singh.

The Mahaar are a Rajput tribe Mahaar, who are entirely distinct from the Mahar, another tribe of Jat origin found in Sindh and Punjab.

The tribe claims descent from Mahaar, a brother of Johiya (the ancestor of the Johiya tribe). Mahaar is said to be the elder brother of Johiya, being a son of Iyas, a Shaikh Siddiqui holyman, who is said to have married Rani Nal, daughter of the Bhatti Rajput Raja Chuharhar. Mahaar’s grandson, Wag became Raja of a place called Garh Mathila. Wag’s grandson, Sanwra is said to have migrated to Sirsa, in what is now Haryana. The Sirsa branch of the Mahaar are known as the Sanwrepotre (the sons of Sanwra in Hindi). Another branch settled in Shahr Fareed in Bahawalpur District At the partition of India, the Sanwrepotre, like other Muslim Jatts of the region, migrated to Pakistan.

The Mahaar are found mostly along the valley of the Sutlej river, in the districts of Bahawalnagar, Okara, Vehari, Lodhran, Sahiwal and Chakwal.

Outside south Punjab, there are several Mahaar villages in Chakwal District, who are said to immigrated from Okara. Interestingly, these villages also contain several settlements of Chadhars and Harrals, who also originate in south Punjab, therefore it seems that was a general migration of to Chakwal from south Punjab. These villages are located near the banks of the Bhagne Kas canal and include Mangwal, Kot Iqbal, Sikriala and Rawal.

The last tribe I will look at in this post are Wahiniwal. According to their traditions, they are of Bhatti Rajput descent. One of their ancestors was born in a depression in the ground, the word for depression in the local Seraiki language is Wihan. The tribe therefore claims descent from the Bhatti Rajputs. They may be connected with the Bahniwal Jats of Hissar in Haryana. The tribe is found in a number of villages around the town of Kamalia. They are also found through out the valley of the Ravi and Sutlej rivers, from Okara in the north to Multan in the south.