I thought I would keep with the theme of tribal groupings found in the Punjab province of Pakistan, and my sthird post will look at some tribes found in the Potohar Region . The Potohar plateau, or sometimes pronounced Pothohar Plateau, is a large region of plateau situated in northern Punjab, Pakistan, separated from the Thal desert region which is located south of the plateau, and looked at in my first post by the magnificent Salt Range mountains. It is bounded on the east by the Jhelum River, on the west by the Indus River, and on the north by the Kala Chitta Range and the Margalla Hills. Islamabad, the capital of Pakistan is located in this region. Most of the population speak the Pothohari dialect of Punjabi, which shows strong influences of Lahnda.

The population is clearly sub-divided into tribes, who refer to themselves as quoms or rarely zats, having a common name and generally supposed to be descended from a traditional common ancestor by agnatic descent, i.e. through males only. Another interesting thing about the various tribes in the region is that there name often ends in al, which is patronymic, for example, the sons of Kals, are the Kalyal and so on, very similar to the Arabic Bin or Slavic ovich or ov. The aals started off as clans of a larger tribe, such as Kanyal being an aal of the Chauhan tribe, which overtime grew in numbers, leading separation from the parent stock. For example, very few tribes in the region are simply known as Bhatti, Chauhan or Panwar, but often as Bhatti Gungal, Chauhan Kanyal or Panwar Bangial. As the region borders the Indus, the traditional dividing line between South Asia and Central Asia, it has seen a good deal of migration from the west, and two of the major tribes of the region, the Awan and Gakhar both have traditions of arriving from the west of the Indus.

The tribes that I shall be looking at fall within the either the category of Jat or Rajput, often simply identifying themselves as zamindar, meaning landowner or cultivator. These tribes also tend to be endogamous, meaning strictly marrying within tribe, with a marked preference of marrying first cousins. Marriage is also a marker of status, for example those branches of a tribe that claim Rajput status will only marry others who are also of Rajput status, and vice versa. The use of the title Rajah, meaning ruler prefixed to the given name signifies that the individual is a Rajput, while the use of the title Chaudhary often signifies that the individual is Jat. All these tribes have practiced Islam since at least the later Middle Ages, and the circumstances of their conversion are shrouded in mystery. Below is a list of tribes, starting with the highest population, that were registered as Rajput, for 1911 Census of India, :

Similarly, the following were registered as , Jat, by the same census:

My point about the fact that there is no strong distinction between Rajputs and Jat in this region in shown by the existence of tribes such as the Kanyal and Kalyal in both the Jat and Rajput category. Similarly, many tribes such as the Kethwal and Dhanyal, both Murree Hill tribes registered themselves on their own, while some members declared themselves as Rajput. The above list is long, and includes some tribes such the Kural, Nagral, Nagrawal and Ramal, where quite frankly there is very little information, while also ignoring the Cheemas of Sui Cheemian. and the Sandhus of Mohra Sandhu in Gujar Khan, who are important Jat tribes of this region. If someone has any information on the Kural for example, then please post in the comments section. The converse is true of the Bhatti, Chauhan, Janjua and Minhas, where quite a bit has been written. In this post, I shall restrict myself by looking at some of the lesser known tribes of the region, namely the Aura, Kalyal, Kanyal, and Khinger. In latter posts, I have looked at the Adrah, Bangial, Baghial, Bhakral, Budhal, Dhamial, Gangal, Hon, Jatal, Matyal, Nagyal, Ratial and Thathaal tribes.

The Aura, sometime written as Aurah are a Jat tribe, found mainly in Gujar Khan Tehsil of Rawalpindi District. Very little is known about them, although they have consistently registered themselves as Jats in all the Census carried out by the British in the early 20th Centuiry. in 1911, they numbered 610. Important Aura villages include Balakhar in Rawalpindi District and Abdullahpur in Jhelum District.

Outside the core area, a colony of Aura is found in Chak 21 S.B, which is the largest settlement of the Aura in Sargodha District. These Aura are immigrants from Gujar Khan Tehsil who were settled in the Sargodha region in the 19th century.

The Kalyal, or sometimes spelt Kalial, are one of the largest Jat clans of the Pothohar region. They claim descent from Kal, a Chandravanshi Rajput, who settled in the Potohar region in the 15th Century. Other tradition makes Kal to be a Bhatti Rajput, which would make the Kalyal a clan of the Bhatti tribe. Therefore, the Kal aal are the descendents of Kals. The Kalyal are essentially a tribe of the Chibhal, a region between the Tawi and Jhelum rivers, now divided by the line of control, forming the districts of Mirpur and Bhimber in Azad Kashmir, and Rajouri, Reasi and parts of Jammu district west of the river Tawi in Indian administered Kashmir. From Chibhal, groups of Kalyal began immigrating to the Punjab plains, initially settling in around Dina, and Sahowa and then spreading to Gujar Khan, which is home to the greatest concentrations of Kalyal. Other groups moved south east, settling in Gujrat District, where they are still an important Jat clan.

Most Kalyal are still found in Gujarkhan, and following are there villages in the tehsil: 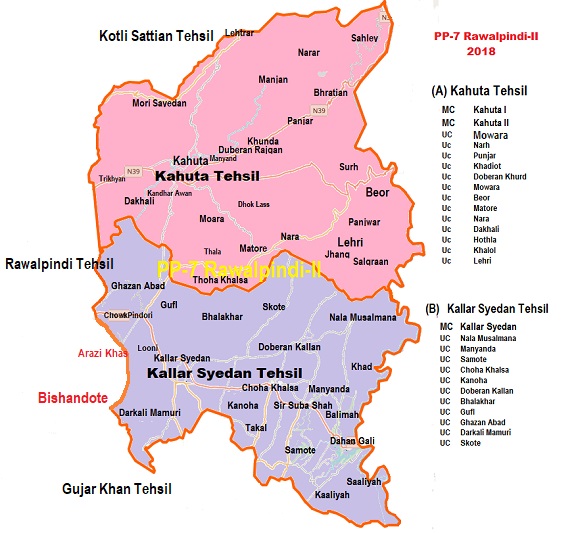 Kalyal Population According to the 1911 Census

Kanyal or sometimes spelt Kanial, are tribe of both Jats and Rajputs status. According to their tradition, the Kanyal originate from the town of Jammu and trace their descent to Jambu Loachon, the founder of the city of Jammu. He had a son named Raja Puran Karan, from whom the tribe claims descent. They are thus descended from the Manhas Rajput tribe. Other traditions however make the Kanyal a clan of Chauhan Rajputs.

There are various stories about the emergence of the Kanyal or Kanial tribes, in the Rawalpindi District and they have always been considered as a high ranking clan of the Rajput tribe. Like the Kalyal, the Kanyal started off as a tribe settled in the Chibhal region, making there way to the Pothohar plateu sometime in the Middle Ages. Groups of Kanyal have immigrated as far south as Darya Khan in the heart of the Thal desert, which makes them far more geographically widespread then the other tribes discussed.

Generally in Rawalpindi, the tribe is considered Rajput, while in the other districts they are considered Jats, and have historically intermarried with neighbouring tribes such as the Thathaal and Bangial.They are found mainly in Gujrat, Jhelum and Rawalpindi Districts of Punjab, basically through out the eastern half of the Pothohar region.

Kanyal Population According to the 1911 Census

Looking now at the Khingar, sometime spelt Khinger, like many of the other tribes already discussed, in certain localities, the Khingar claim to be Rajput, while in others they are classified as Jats. The Khingar are found mainly in Jhelum District, and Gujar Khan Tehsil of Rawalpindi District, with the Jhelum branch tending generally calls itself Jat, while in Gujar Khan, some members claim to be Rajput, while other Jat. There are also several Khingar villages in the Thal portion of Mianwali District. The tribe claims descent from Khingar, who was said to be a Bhatti Rajput. Acccording to tribal traditions, Khingar was descended from the warlords, Rai Sandal Khan Bhatti and in particular his grandson, Rai Abdullah Khan Bhatti, also popularly known as Dulla Bhatti, considered a folk hero by many in the Punjab. Khingar is said to have migrated with his kinsmen from the town of Pindi Bhattian, near Lahore, and settled in Gujar Khan. Interestingly, Khingar is a common first name among Rajputs from Kathiawar, but the Khingar Bhattis themselves have no tradition of a Kathiawar ancestry.